God’s New Message for the World 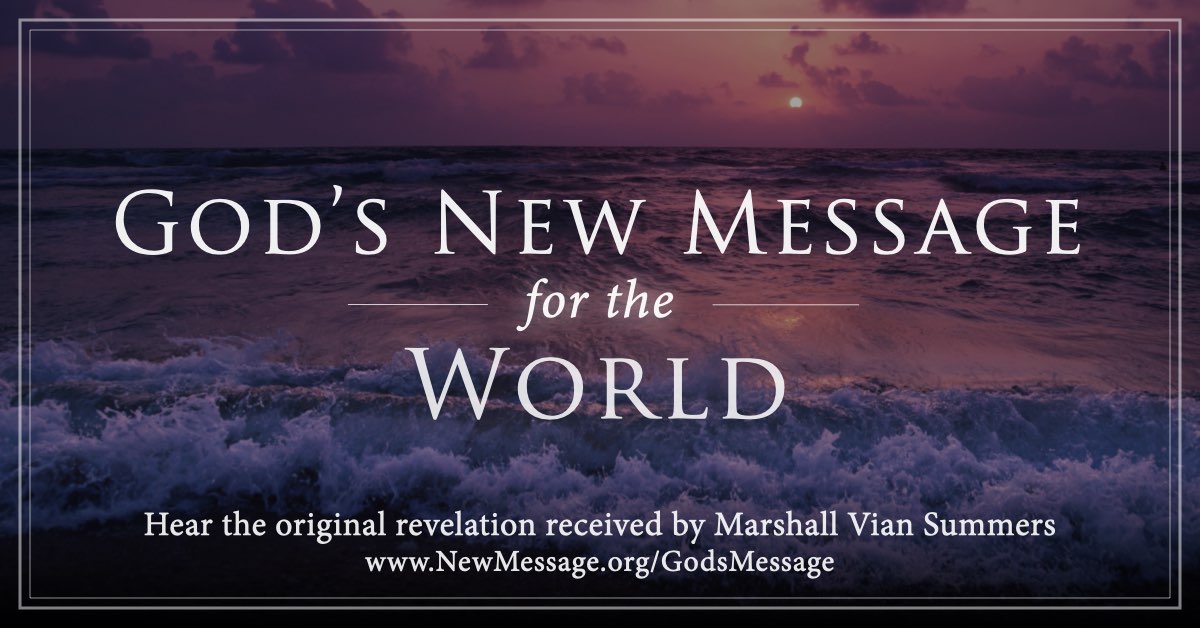 As revealed to
Marshall Vian Summers
on February 28, 2011
in Boulder, CO For humanity is now facing the Great Waves of change—great environmental, economic and social change. It is facing its greatest challenges, its most difficult obstacles and its greatest call for unity and cooperation.

Receive then the New Message and take it to heart. Make it your study. Make it your emphasis. Do not condemn it or dispute it, or you will not be able to receive the power and the grace, the wisdom and the strength that it provides.

See the world now at a great turning point, where ever growing numbers of people will be drinking from a slowly shrinking well. Look out beyond the horizon and not merely into the near future, and you will see the Great Waves are building there. You will see that humanity will have to change and to adapt to a new set of circumstances and that nature, so long ignored and maligned, will now set the terms of engagement.

The foolish will persist. The blind will continue to think that the future will be like the past. And those who are unaware will proclaim that they know what must be done for the world.

But despite the greatest and most accurate pronouncements and theories, you must have a New Revelation, or the obstacles will be too great and too formidable, the dangers too overwhelming, the human spirit too weak and too diffracted, the nations too divided and too self-serving and contentious.

It is a time when humanity will have to rethink its position in the world and to shift its priorities from growth and expansion to stability and security for the world’s welfare and for the world’s peoples.

It is the time that requires vision, a time that will challenge those who have built their careers on their theories and their systems of belief; a time when the welfare of your children and their children will have to be seriously considered instead of merely assumed; a time when the world’s resources will have to be preserved rather than merely squandered and overused; a time when the needs of the poorer nations will be directly influencing the welfare of the stronger nations; a time to cease your endless conflicts to build an infrastructure that can sustain the human family.

Nations will have to cooperate, or they will become increasingly imperiled and endangered. Resources will become ever more expensive and difficult to acquire. Food production will be lost. The climates of the world are changing. Technology alone will not be able to meet many of the great challenges to come.

That is why there is a New Revelation, a New Message from God, because humanity cannot and has not responded sufficiently—except perhaps with a few exceptional individuals—to the specter of change that is upon you and before you.

It is not merely a question of adaptation. It is a question of fundamental change—a change of heart, a change of approach, a change of attitude. For what has worked before may not work now. What has been assumed may prove to be ineffectual and inadequate. Everything will have to be reconsidered.

The Revelation will reveal this and why it is true. It will speak to what those who can see have already experienced and are experiencing now. It will resonate with the great truths of all your religions, and yet it will reveal things that have never been revealed before. It is a Message to the individual who is struggling to see and know the truth. And it is a Message to the whole world, which is facing the Great Waves of change. 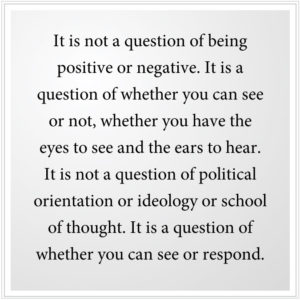 You cannot rely now upon what has occurred before. Even nature has been so disrupted that you will not be able to rely upon certain things. Nations will struggle economically. There will be growth, but only temporarily. And the needs of the human family will so far exceed the capacity, or seemingly so, that it will overwhelm any progress that you can make.

This will create a change in priority. Security now will not merely be protecting one nation from another. It will be securing the stability of large populations of people. Everyone will have to be involved in this to some degree. It is not only a question for governments or governance. It is the whole world.

Many people will be lost in this great transition. But the losses can be minimized, and the tragedies can be mitigated. It will take everyone to participate for humanity to survive the Great Waves of change and to be in a position to build a new and more cooperative world—a world based not upon endless growth and expansion, but upon the stability and security of the peoples of the world. It will be a future very different from the past and very different from the world that you see at this moment. 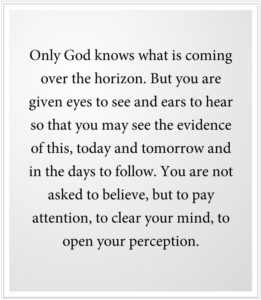 Only God knows what is coming over the horizon. But you are given eyes to see and ears to hear so that you may see the evidence of this, today and tomorrow and in the days to follow. You are not asked to believe, but to pay attention, to clear your mind, to open your perception. The least sophisticated amongst you can tell that the winds are changing, while the experts keep debating realities from the past. It is not a question of intellectual brilliance. It is a question of attention and clarity, vision and discernment.

That is why the Revelation must be given. It is not a human invention. It is not the product of one man’s thinking or imagination. Hardly so. It is not a revolution against religious thinking as it exists today. It is entirely new. It does not come to condemn, but to correct and to give you the power to create. It is a Message for the world.

The darkening skies are growing. The difficulties of humanity are escalating. Governments will become impotent in the face of this unless guided by a greater vision and a greater commitment.

Humanity is still emerging from a primitive state, a tribal state, into a world community. It is a very difficult and dangerous transition, but it must occur, as it must occur in all worlds in the universe where intelligent life has evolved.

It is a different world than the world you think of today, but it is a world in keeping with nature, for nature has not changed. The world has changed, but humanity has not changed with it. And now you are entering new territory. Foreign and dangerous it is. It will require great care as you proceed into the future.

What will guide human perception? What will inform people’s decisions? That is why there is a New Revelation, brought into the world by one man with a small group of assistants. He is the Messenger for this time, but he will not fit the expectations of a superman. He will not have magical powers. He will not be charismatic. He will not be entertaining. But he is the Messenger, and it is his life that has been the vehicle for the transmission of a New Message from God.

God loves the world and has given humanity great Teachings at important turning points to establish human civilization and to free people from tribal identity, to enable civilization to evolve and to grow despite its many tragedies and errors.

Now you are moving from a civilization to a world community, for only this will provide [real security] and protect the human family into the future. It is a transition that few can even think of constructively at this moment. But it is your destiny.

Previous Chapter: The Assembly – The Presence of Angels Watching over Earth
Next Chapter: God Is Moving Humanity in a New Direction – The World Has Changed