Preparing for the Greater Community Introduction 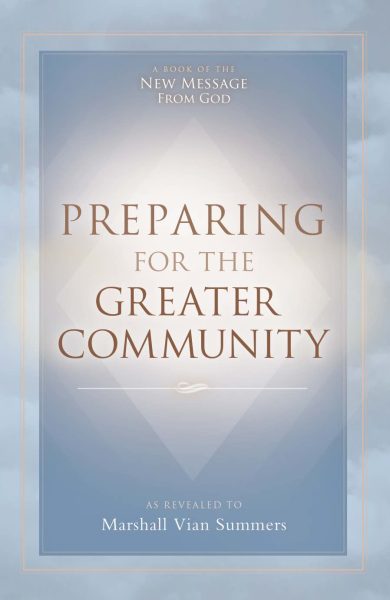 Preparing for the Greater Community is a book of Revelation from the Creator of all life given to prepare us for the reality of Contact with extraterrestrial life and for humanity’s emergence into a “Greater Community” of worlds in the universe.

Contact has begun, yet it is not Contact of a beneficial form for humanity. We are facing an alien Intervention into human affairs and this represents a threat to our freedom and survival as a race. And yet it also represents a great opportunity. Our isolation in the universe is now over, and humanity’s emergence into the Greater Community has begun. This is perhaps the greatest event in human history and it is happening right now, in our time. Yet we are unaware and unprepared.

In addition, Contact is occurring at a time when we are racing towards a dangerous and uncertain future in our world. Humanity is outstripping the Earth of its life-giving resources at an alarming rate, changing the climate of the world and destroying the natural environment as never before. At the same time, political, social and religious conflict and division are escalating, fracturing the human family when instead we must be working to find a real and functioning unity to ensure our collective survival. We are divided, and this makes us vulnerable to outside influence and intervention from the universe around us.

For over 30 years, Marshall Vian Summers has been receiving a communication from the Creator of all life. This communication has been translated into human language by the Angelic Presence who watch over our world, who then speak this message through Marshall in the Voice of Revelation. The voice was recorded and then transcribed and presented in the text of this book, and the other books of the New Message. And from the beginning, this New Message from God was centered on the reality of the Greater Community and humanity’s emergence into a larger universe.

Revealed in 1997, Preparing for the Greater Community was the first text of the New Message to reveal the larger reality of the Greater Community in which we live and to present a comprehensive preparation for life in this new and challenging environment. Here the Creator of all life is revealing what awaits humanity in the universe at large, the challenge and complexity of interaction between worlds, and the essential tools humanity will need to navigate its engagement with forces from beyond our world. Here the human family eclipses its millennia-old isolation in the universe and learns to interact wisely with other forms of intelligent life. This interaction will greatly expand how we view ourselves, God and our place in the universe.

Therefore, the 1980s and 1990s were a seminal period in the revelation of the Greater Community in our world. And yet few at that time were ready to hear and respond to this message and to begin the preparation themselves. It is now that this book and others from that period are being presented to the world for the first time. It is especially important this happen now because of the great need for humanity to prepare and respond to the growing presence of the alien Intervention in our world.

In addition, there are people in the world today who are innately connected to life in the universe and are now ready to begin their inner and outer preparation for humanity’s emergence into the Greater Community. The connection and awareness they hold is kept within their Knowledge, the deeper spiritual Mind within them. The New Message from God provides the key to unlocking this Knowledge and with it your deeper nature and heritage beyond the world in order for you to serve the world now as it undergoes Contact and emergence into a larger arena of intelligent life.

Preparing for the Greater Community provides this key to you. This opens for you an essential stage in your preparation for a new life, in a changing world, in a greater universe beyond. Humanity’s success and survival in the future depend on you and others like you undertaking this preparation.

This will enable you to participate in the world in a new way, as guided by the power of Knowledge within you and playing your part in a greater coordination of people working together to support humanity in making this great evolutionary step forward. This may be the greatest step humanity has ever taken and it is no accident you are here at this time.

Preparing for the Greater Community

Chapter 1: What is the Greater Community?

Chapter 2: The Greater Community Presence in the World

Chapter 5: Resources, Trade and Competition in the Greater Community

Chapter 6: The Meaning of Spiritual Development in the Greater Community

Chapter 10: Gaining Strength and Influence in the Mental Environment

Chapter 12: Going Beyond the Limits of Human Religion and Belief

Guidelines for Preparing for the Greater Community