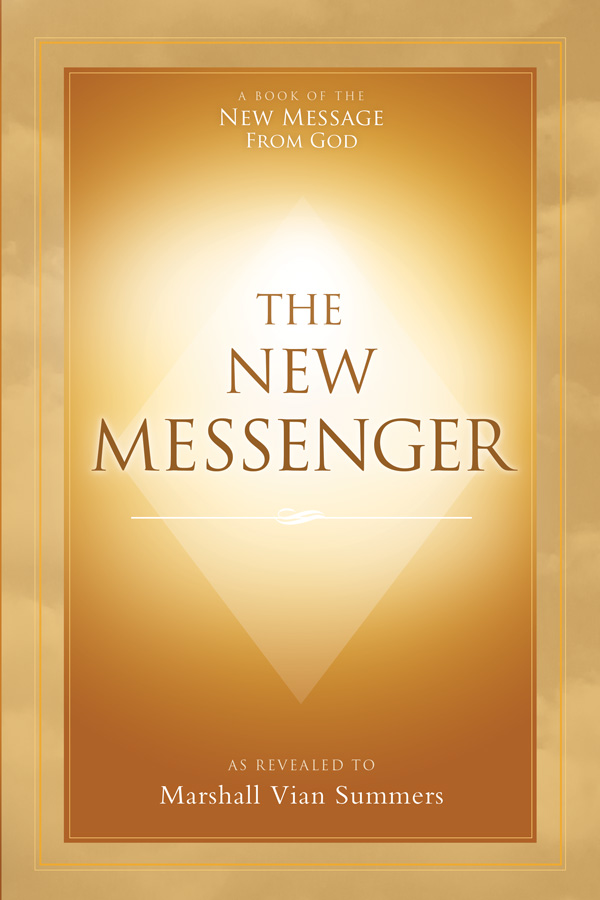 The New Messenger is a book of Revelation given by the Creator of all life to the human family through the Messenger Marshall Vian Summers.

Here God is revealing the origin, lineage and mission of the Messengers of God who, at different times in human history, have been sent into the world to receive and present New Revelations to the human family. Now at this turning point in the history and evolution of our world, God has sent a New Messenger into the world to receive a Revelation unlike anything that has ever been given before.

Down through history, the Creator has given Revelation and Wisdom to meet the growing needs of people and nations at different times and in different parts of the world. Through the Messengers of the past, God’s progressive Revelations have flowed into human awareness, advancing human civilization and re-awakening the experience of the Divine Presence in the world.

God’s progressive Revelations now continue anew through a New Message from God, delivered through a New Messenger, a man named Marshall Vian Summers. The Messenger has been engaged in a long and mysterious process of Revelation. This process began for him at the age of 33 and has continued for over three decades. Working through most of these years in obscurity, with only his family and a few assistants with him, he has received the largest and most comprehensive Revelation ever given to the human family.

The New Messenger is but a small part of the larger text of the New Message from God. The words of the New Message are a direct communication from God, translated into human language by the Angelic Presence that watches over this world, and then spoken through the Messenger Marshall Vian Summers. This spoken communication is then recorded, transcribed and is being compiled into a complete text by the Messenger himself. This is the first time in history that the Voice of Revelation has been recorded and is now being made available for people everywhere to hear for themselves.

The Voice of Revelation continues to speak through the Messenger. The Word and the Sound of God’s communication are now being heard around the world.

Why does the world need a New Message from God? Why is this happening now? The New Message states that it is here to alert, empower and prepare the human family to meet the critical and escalating needs of our time as we now face Great Waves of environmental, political and economic upheaval and the hidden reality of contact with intelligent life in the universe. To face and navigate challenges of this magnitude, we need a New Message from God. Here the New Message makes clear that the traditions of the past cannot prepare us for the thresholds before us now, especially in a world of increasing religious violence, division and disintegration.

These are questions that all people may ask. Now God has spoken again with a series of revelations that answer these questions and many more. Through the books of the New Message, God is revealing the true identity of God’s current and past Messengers: their selection, their preparation, their relationship to one another and the true meaning of their appearance and emergence in the world.

The New Messenger teaches that all the Messengers of God are members of the Angelic Assembly that oversees the world. Across human history, this Assembly, in response to the Plan of God, has sent into the world one of their own at certain times and places to receive an original Revelation from the Creator. These are the Messengers of God. The coming of a New Messenger represents the opening of the next chapter in the progressive Revelation of God’s Will and Plan for the world.

The New Message teaches that God’s presence and communication are transmitted into the world at many different levels: through the spiritual mind of Knowledge in each person, through teachers who offer instruction and guidance through existing traditions, through reformers who endeavor to correct and renew these traditions and through prophets who can bring original warning and direction concerning imminent change and events in the world. At every moment, God is moving and communicating in the world, through a myriad of expressions and demonstrations of inspiration, forgiveness, compassion and cooperation between people.

Yet The New Messenger reveals that it is through Messengers that the Creator speaks to the entire world, presenting a whole new reality of understanding and awareness that is meant to touch the lives of people in all nations, cultures and religions. It is at great turning points that God moves to touch the world all at once, to move the human family in a new direction and to prepare humanity for the immense evolutionary thresholds that will determine its success and survival in the future. The arrival of a New Messenger signals that such a threshold has been reached, and that God is now speaking to the whole world.

Messengers appear in the world very infrequently, many centuries or even millennia apart, and have been greatly misunderstood over time. They have been imagined to be perfect and immaculate individuals, to perform miracles to impress the masses, to be pure reflections of God or even to be a direct appearance of God incarnate. Here the human imagination amplifies itself over time, clouding and distorting the true lives and stories of these rare individuals and the real meaning of their appearance in the world, both in the past and now in the present.

Through the books of the New Message from God, the real origin, identity and journey of Messengers both known and unknown are being clarified and revealed anew. Here we are shown that the Messengers are both human beings and also members of the Angelic Assembly, selected and prepared beyond this world to enter into human form as a Messenger of God and to receive God’s New Revelation for the world. While they are in the world, the Messengers are imperfect, fallible and susceptible to the many hazards and influences of human life—and yet they carry a presence that burns within them like a sacred fire. They carry the presence and power of the greater reality of Creation beyond the world, and they seek to extend this to all who can receive God’s New Revelation for that time and the times to come.

The New Messenger reveals the mission and calling of Marshall Vian Summers, the living Messenger now in the world. Here we are invited to understand the Messenger for our time, and to receive the gift that he brings. Here we are given a lifeline to the mysterious reality of our Ancient Home beyond the world and to those who sent us into the world with a purpose to fulfill: to live a life of true inspiration, relationship and service to others. This is the gift and demonstration of the Messenger—that each of us may remember and return to our true identity and allow this to express itself through us in our time in the world.

Remarkably, you have found the New Message from God, or it has found you. It is no coincidence that this is the case. This opens the next chapter in the mystery of your life and of your presence in the world at this time. The door opens before you. You need only enter to begin.

As you enter more deeply into the New Message from God, the impact on your life will grow, bringing a greater experience of clarity, inner certainty and true direction to your life. In time, your questions will be answered as you find growing freedom from self-doubt, inner conflict and the restraints of the past. Here the calling and the gift of the Messenger will come alive in your life, reminding you always that there is a greater life you are destined to live.

Chapter 1: The Will of Heaven

Chapter 2: The Origin of The Messenger

Chapter 3: The Lineage of The Messenger

Chapter 4: The Story of The Messenger

Chapter 5: The Requirements of the Messenger

Chapter 6: The Veil of the Messenger

Chapter 8: Facing the Light of Revelation

Chapter 9: The Journey of the Messenger

Chapter 11: The Consequence of Revelation

Chapter 13: Walking with the Messenger