The Journey to a New Life Introduction 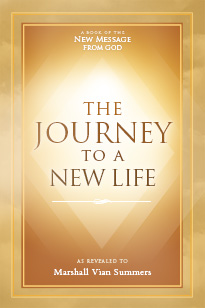 The Journey to a New Life is a book of Revelation given by the Creator of all life to the human family through the Messenger Marshall Vian Summers.

God’s progressive Revelation is continuing anew through a New Message from God, of which The Journey to a New Life is but a part. The words of this text are a direct communication from the Creator of all life, translated into human language by the Angelic Presence that watches over this world, and then spoken through the Messenger Marshall Vian Summers, who has given over 30 years of his life to this process of Revelation.

At this time, The Messenger is engaged in compiling over three decades of spoken Revelation into a final and complete text—The One Book of the New Message from God. This book of Revelation will ultimately be divided into six volumes and possibly more. Each volume will contain two or more books, and each book will be organized by chapter and verse. Therefore, the New Message from God will be structured in the following way: Volume > Book > Chapter > Verse.

Though it appears to be a book in the hand, The Journey to a New Life is something far greater. It is a calling and a communication from the Heart of God to you. In the pages of this book, God’s Presence calls to you and to all people, calling for you to awaken from the dream and nightmare of living in Separation apart from your Source, calling to the presence of “Knowledge,” the deeper spiritual Intelligence that lives within you, waiting to be discovered.

The Journey to a New Life is part of a living communication from God to humanity. Remarkably, you have found the New Message from God, or it has found you. It is no coincidence that this is the case. This opens the next chapter in the mystery of your life and of your presence in the world at this time. The door opens before you. You need only enter to begin.

The Journey to a New Life

Chapter 6: The Gift of a New Life

Chapter 7: The Journey to a New Life

Chapter 8: Your Purpose and Destiny

Chapter 9: Building the Bridge to a New Life

Chapter 10: Courage and the Will to Prepare

Chapter 12: Preparing for a Greater Role in the World

Chapter 14: You are Here for a Greater Purpose