Home » Is He God’s New Messenger?

From the Journal of Patricia Summers:

The Ozy article Is He God’s New Messenger?, published November 26, 2017, gets into the legitimate controversy of who Marshall Vian Summers claims to be, but it does not give the reader a real sense of the depth, scope and purpose of the Revelation he has received or his own teachings, and their importance to people everywhere in finding their true strength and direction in life.

Marshall Vian’s focus is to empower people to gain the discernment to make wise decisions and to engage with their innate spirituality, called Knowledge in the New Message, which will lead them to find their greater contribution and the lasting relationships that accompany this.

As Marshall Vian’s wife and companion of 34 years, I have witnessed up close the profoundly mysterious process he has undergone, demonstrating his humility and service by devoting his entire life to a mission not of his own making.

In this process of Divine transmission, The Assembly is speaking to the one individual asked to receive their communication, their Messenger.

Regarding this process, the Assembly says:

We are the Revelation. God does not speak because God is too great. Therefore, God’s Will is expressed and communicated to the Angelic Presence, who oversee all worlds where intelligent life has evolved. The Will of the Creator is then expressed in the words and language of that world, for that people.”

– The Voice of the Revelation

We are the many, speaking as One and the One speaking as many, a reality you cannot consider living in Separation in this world. We are the Ones to translate the Will of God into words, into practices, into actions, into clarification. With the Power of Creation, We bring this to you.” 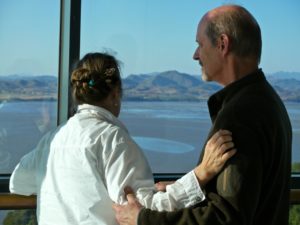 Marshall, Patricia and Reed have traveled extensively around the world. Here is a look at one extended journey in 2014 – 2015:

Marshall Vian says it has been so important for him to go to places of consequence in the world. The condition of the people and the natural world in these cities and countries has had an enormous impact upon him. It was as a result of these journeys, especially, that Marshall Vian says he could see that the New Message Revelation is for the whole world.

Therefore, for any and all who have seen and read the article, Is He God’s New Messenger?, whether you be interested or irked and dismissive, thank you for taking the time to read about Marshall Vian and considering, however briefly, the immense body of Revelation that he has received for the world.

When something this new, this big, this revolutionary is given, it merits consideration and exploration, especially if it brings a challenging new perspective regarding the great difficulties facing the world at large and each of us intimately in our personal lives.

I encourage you to explore and learn more about Marshall Vian and the body of Revelation he is receiving (both spoken and written) and to share your views on this. Your perspective and experience are critical to this vital conversation about life, about meaning, about destiny and about God.

Return to the New Message Journal.

12 Responses to "Is He God’s New Messenger?"